Datok Ruhanie Ahmad, former Press and Political Secretary to the then Home Minister, Tun Musa Hitam has a lot of questions and observations on the reasons this dreadful book is published and the timing of its publication. This is taken from his blog RocCyberPrince and MayaPutera.

The May 13 - a new book being written based on information purportedly obtained from the British Public Records Office, at the Kew Garden, London, is a gross misrepresentation of history.

Therefore, it is important for us to find out why such a book is being written at this very point of time and what are the motives behind it.

We have to ask these questions because Malaysia currently seems to be facing several onslaughts from certain quarters especially concerning the fact that Islam is the official religion of the country and also about the status, rights and privileges of the bumiputera as being instituted in the Federal Constitution.

The emergence of this new book - May 13 - in the market should therefore be examined whether or not it forms as part and parcel of such onslaughts. Or, is it just an isolated and uncoordinated move, but could still be construed as part of the same game?

More significantly, why is this book being published now - in the year when we are celebrating our 50th Independence celebration? Any specific reasons for this? Why is it not being written and published in 1999, soon after the public records which form the basis of the book were being declassified by the British authorities?

Why does the book claim that the May 13 riots of 1969 “were carefully planned and organized” by a group of people categorized as “the then emergent Malay capitalist class” to enable “a coup d’etat” and a regime change in Malaysia because the Prime Minister at that time, Tunku Abdul Rahman Putra, “represented the outdated Malay aristocracy”? Does it mean to imply that the bloody incidence was created to justify the formulation and the implementation of the New Economic Policy?

Why publish the book now when several super powers are seen to be most active in their efforts to establish hegemony and dominance in south east Asia since they launched the so-called war on terror against the Muslims and several Muslim countries in central and west Asia beginning 2001?

Is the book aimed at subverting the unity, solidarity and resilience of the multi-ethnic Malaysians in the face of the mounting subtle pressures from some neo-imperialist powers and its staunch allies in the region?

Is the book aimed at instigating certain quarters in Malaysia to revolt against the government through the general elections which is about one year away from now?

Does the writer intend to revive the old provocative slogan of “blood for blood” as being propagated by elements of the Communist United Front (CUF) on the polling day of the May 1969 general elections?

I know the writer of May 13. He was a one-term Malaysian member of parliament (DAP-Petaling Jaya) - from 1990 to 1995. I am familiar with his prejudices, political bias, attitude towards the government of Malaysia, perceptions about the west, statements about the New Economic Policy and remarks about the Malays and Bumiputera in general.

But, I am not sure if he is a friend of the imperialists, neo-imperialists or even their allies in this region. Neither do I know whether he is a communist sympathizer or not. But, how do we describe a writer who attempts to re-write the May 13 history in Malaysia purely and solely based on the perceptions of British diplomats in Malaysia who claimed to have put their ears “close to the ground” during the May 13 incidence; based on the accounts of a British journalist who claimed to be an eyewitness during the curfew; based on intelligence gathered by diplomats from Australia and New Zealand; based on the observations of white man diplomats stationed in Singapore and Indonesia; based on remarks by a Singapore leader who propagated the Malaysian Malaysia concept; as well as based on reports by a foreign magazine which was widely believed to have intimate association with the CIA?

If the writer is dead serious to write about his allegation that the 13 May 1969 incidence purportedly aimed at deposing Tunku Abdul Rahman as the prime minister in the early era of independent Malaysia, why only now he writes about it? Why does he totally ignore historical data, facts and figures found in Malaysia? 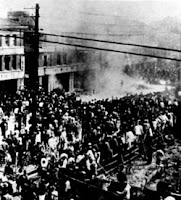 We may say that the writer wants to wait for the secret records about the May 13 in the British Public Records Office to be declassified so that he can have a full access to them. But, aren’t the records already being declassified in 1999? Then, why does he wait until eight years after the records were being declassified? Because the writer thinks now is the most opportune time to launch a pro-Chinese propaganda aimed at evoking a fresh anti-Malay feeling to a new height in Malaysia? Why, to eradicate what the writer believes as the dominance of the Malay power in this country?

So, what actually is the true and ultimate objective behind the publication of this book? To ridicule the wisdom of Malay leaders in handling a crisis like the May 13, 1969? To blame the Malaysian Armed Forces for allegedly being anti-Chinese? To amplify the prejudice of the British colonialists and neo-colonialists on the independent and sovereign Malaysia? To belittle Malaysis’s 50th Merdeka celebration? To further the interest of certain foreign powers, especially those who are allegedly buying into some Malaysian GLCs through proxies?

I tend to agree with the writer on one thing - the May 13 riots “were by no means a spontaneous outburst of racial violence in a multi-racial society.” However, I am in total disagreement with him that the riots “were carefully planned and organized and that they were an excuse for the new regime to declare an emergency to effect the regime change.”

Malaysian leaders are not like US President, J W Bush, who needed a 911 tragedy to launch pre-emptive wars on Afghanistan and Iraq which had blatantly killed hundreds of thousands of civilians and destroying the heritage of independent nations. As such, Malaysian leaders did not need to plan a bloodshed to formulate the New Economic Policy.

In the context of the May 13 1969 incidence in Malaysia, no democratic Malaysian leaders had ever chosen to resort to violence in order to obtain absolute powers in this country.

But, according to a white paper - The Path Of Violence To Absolute Power - being tabled in Parliament by Tun Abdul Razak Hussein, on 8 November, 1968, it was elements of the CUF which had planned to resort to violence in order to achieve an absolute power in Malaysia in 1970s.

The report said: “These (CUF) elements defied Police instruction and organized a large parade in which an estimated number of ten thousand persons took part and marched through the centre of Kuala Lumpur, flouting every Police instruction. They chanted Maoist slogans, sang “the East is Red”, and displayed portraits of Mao Tse-Tong and the Red Flag. The parade passed through the heart of Kuala Lumpur and tied up traffic in almost every major street in the city, and provoked Malay bystanders with shouts of “Malai si!” (Death to the Malays!) and “Hutang Darah bayar darah (Blood debt will be repaid with blood).”

Well, if the records are there, why does the writer choose to write that the May 13 riots “were carefully planned” coup d’etat? If the records are there, why does the writer put the blame on the Malaysian government for what had happened? Why does he put the blame on Tun Razak for being “in complete control from the start of the riots and with the emergency in place, had a free hand in planning the post-1969 political makeup with the backing of the armed forces”? Does he expect the Malaysian government to just keep quiet and see that the country being torn to pieces?

Anyway, this game of blaming the Malaysian government for what had happened in May 1969, as being voiced out by the writer of The May 13, is actually almost similar in tone to the voice of the Communist Party of Malaya (CPM) in June 1969.

A white paper - The Resurgence Of Armed Communist In West Malaysia - being tabled by Tun Dr. Ismail Abdul Rahman, in the Dewan Rakyat on October 1, 1971, stated that in June 1969, the CPM had issued one statement accusing “the Rahman-Razak complot to blatantly killing the people of Malaysia, especially the Chinese” to enable them enforce a “fascist military rule” in Malaysia. The CPM statement also urged Malaysians not to forget the “blood for blood” slogan and those responsible for the bloodshed, i.e. the so-called (Rahman-Razak complot).

So, do we trace any similarity about what is being stated in the above white paper with this book May 13 book? If you don’t, please refer to page 65 of the book and read this statement: “The 1969 riots were the works of Malay thugs orchestrated by politicians behind the coup d’etat.”

When the CPM accused that it was the so-called “Rahman-Razak complot” which was responsible for the 1969 bloodshed, the CPM said it with an intention to instigate Malaysians, especially the Chinese, to go on with its struggle against the Malaysian government.

So, when the writer of May 13 says that it was the so-called Malay thugs being backed by Malay politicians who started the bloodshed in 1969, what does he have in mind? Does he want to instigate another ethnic riot in Malaysia?

Yes, what about all those facts Mr. Kua Kia Soong? Don’t tell us that you are suffering from a very acute historical amnesia syndrome? Or, have you forgotten the meaning of a Malay saying that you learnt in Batu Pahat that “terlajak perahu boleh diundur, terlajak cakap parah padahnya”?

interesting write up, now who will tell us the remaining part of those hidden stories/facts

When we are ready to face the truth ... Not when we easily succumb to liars and chauvanist like Dr Kua Kia Soong.

Kua Kia Soong qualifies as a candidate for detention under ISA.This guy truely is messed up with evil intentions.

I was one of the first few buyer of this book and i find that it is thought provoking.

It highlights a generally known fact that the race cards are constantly used by the governing bodies to divide and conquer.

I personally believe that UMNO thrives when racial tension is high.

I am a Malaysian, and i am proud to be one. But i will never support a government that thrives on racial segregation and crutches.

my father chinesse n my mother is malay...so wat i'm? all of u know the answer...in the truly malaysian malaysia...but in this contact..malay is still have thair 'ketuanan' in this contry...why? becos beside this malay race...chinese or indian is like indon in malaysia...i'm not try to talk about 'perkauman' here but this is fact!!we don't have 'one' chinese or india 'sultan' in this country..n all indian n chiesse be in Tanah Melayu becos of Inggeris man!!